This baked spinach artichoke dip is a guaranteed party hit! It's deliciously creamy and cheesy, but shhh! A secret veggie ingredient is hiding inside it.

If you want to impress guests at your next holiday party, make this spinach artichoke dip! It’s creamy, cheesy, and rich with briny artichoke flavor. In fact, it’s so good that every time we make it, Jack and I devour it standing at the kitchen counter. We can’t get enough!

But I’ll let you in on a secret: this spinach artichoke dip is made of mostly veggies. Sure, it’s loaded with the essentials – spinach and artichokes – but it also contains a surprising veggie ingredient: cauliflower! Instead of using cream cheese, sour cream, or mayonnaise to make this dip’s creamy base, I blend boiled cauliflower with Greek yogurt and a little olive oil. The resulting puree is just as smooth and luscious as any conventional creamy dip, but it’s so much lighter!

From experience (see above), I can tell you that this spinach artichoke dip is completely addictive. Luckily, though, it’s filled with good-for-you ingredients, so make it for a gathering (or just for you), and dive in! 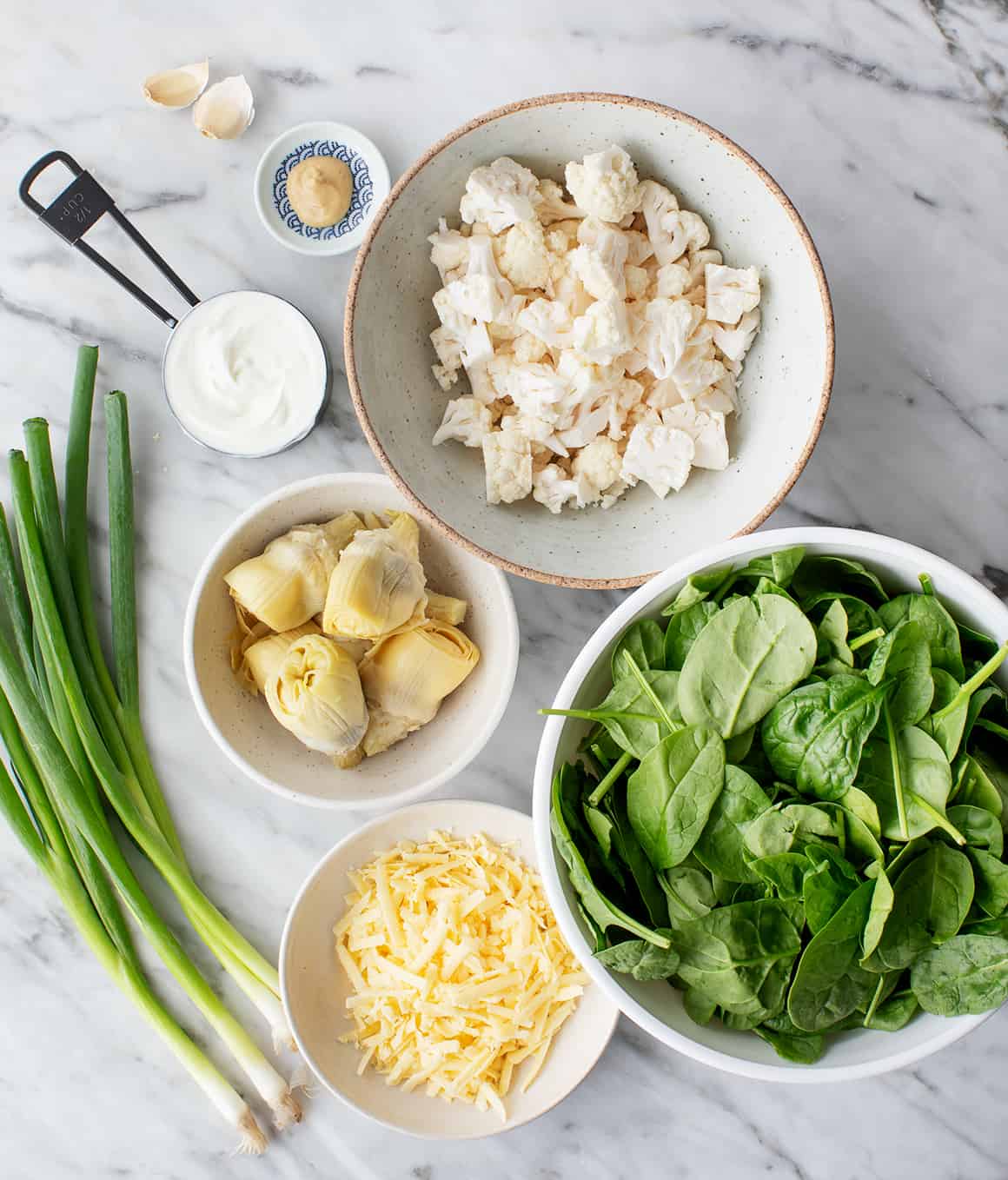 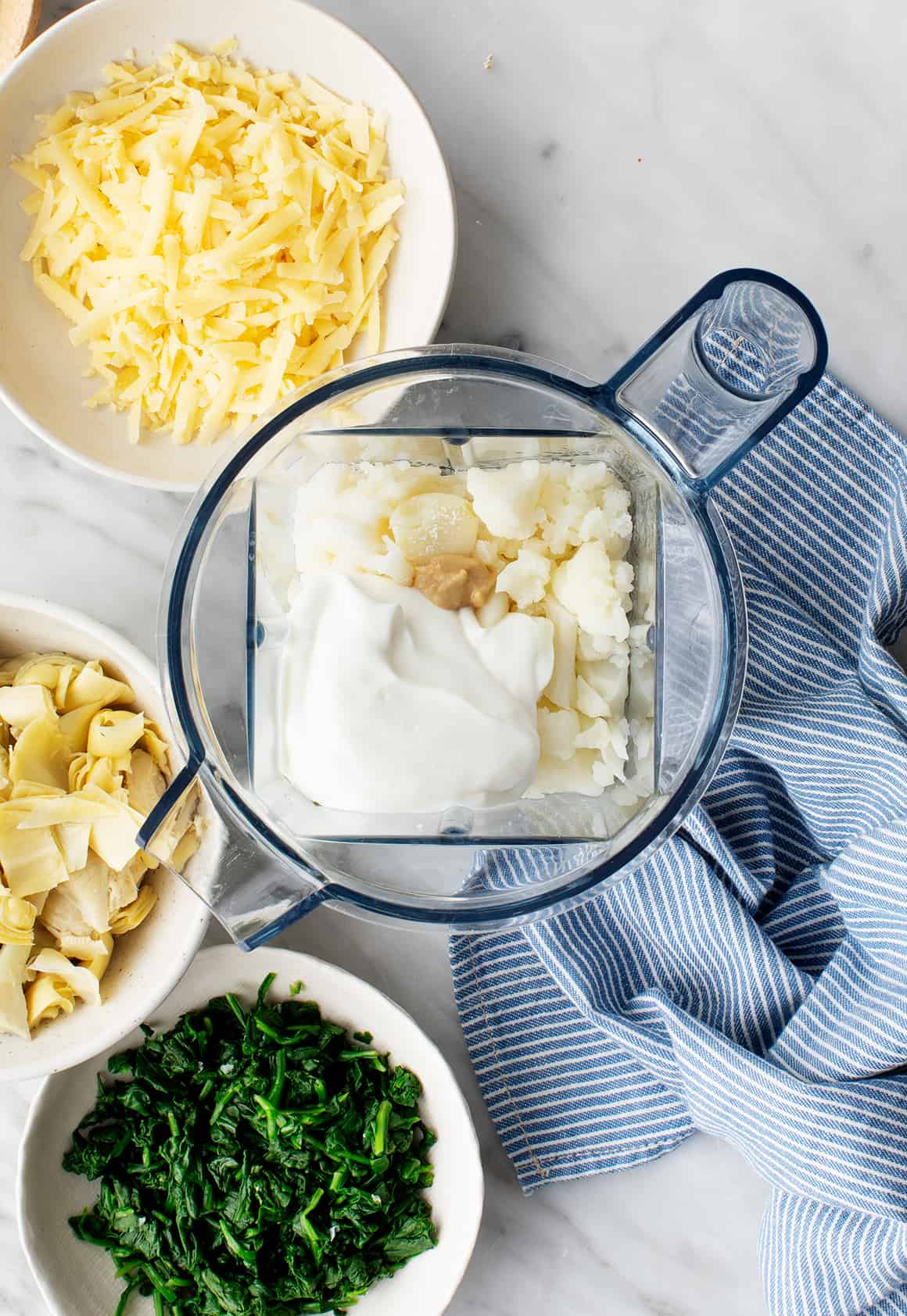 How to Make Spinach Artichoke Dip

Next, blanch the spinach. Add it to the pot of boiling water for just a few seconds (it wilts quickly!), and transfer it to a bowl of ice water to stop the cooking process. Then, scoop the spinach onto a kitchen towel and squeeze out any excess liquid. Don’t skip this step – no one likes watery spinach artichoke dip! Roughly chop the drained spinach, and set it aside. 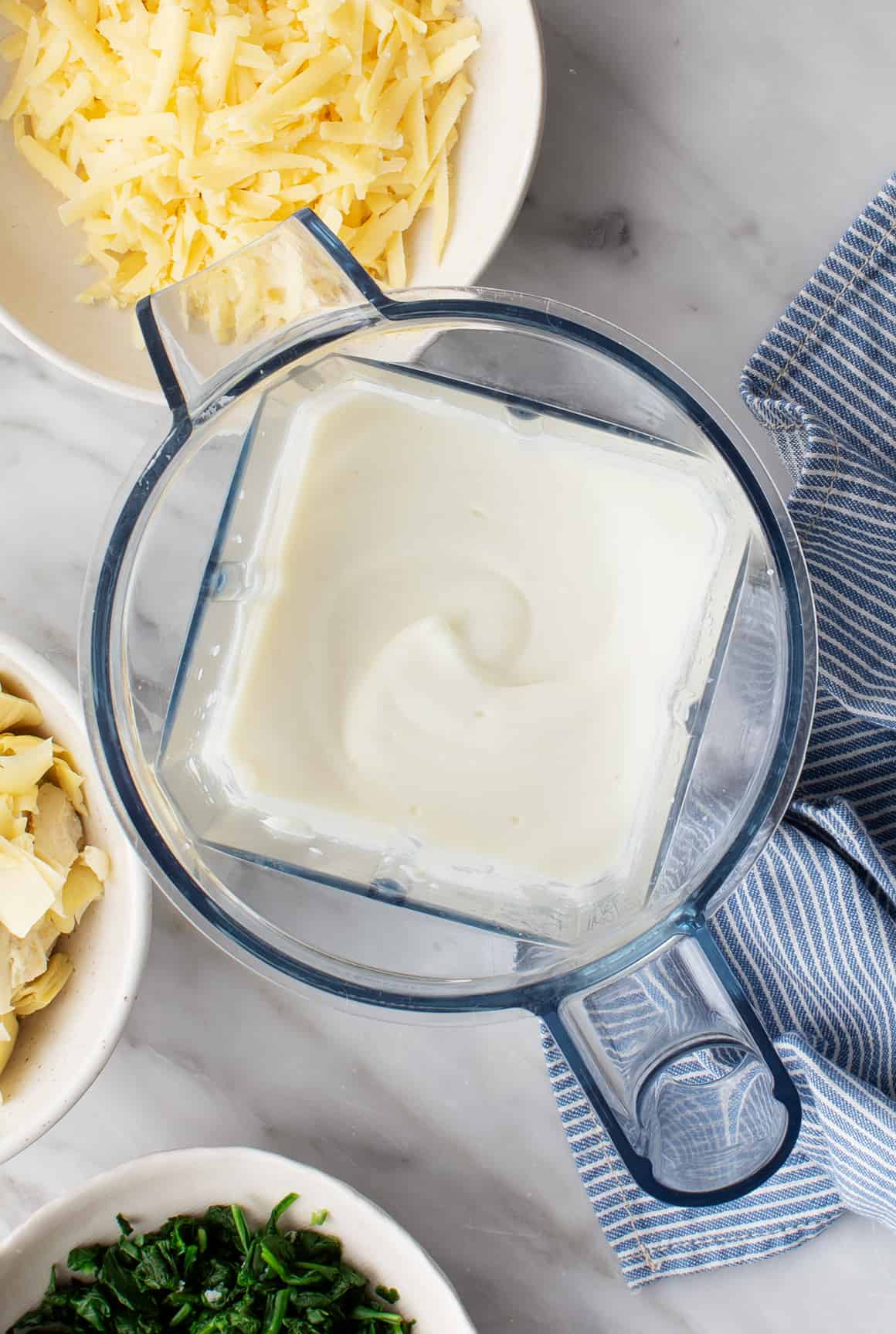 Then, make the dip’s creamy base. Allow the cauliflower to cool almost to room temperature before blending it with the cooked garlic, Greek yogurt, mustard, olive oil, and salt. 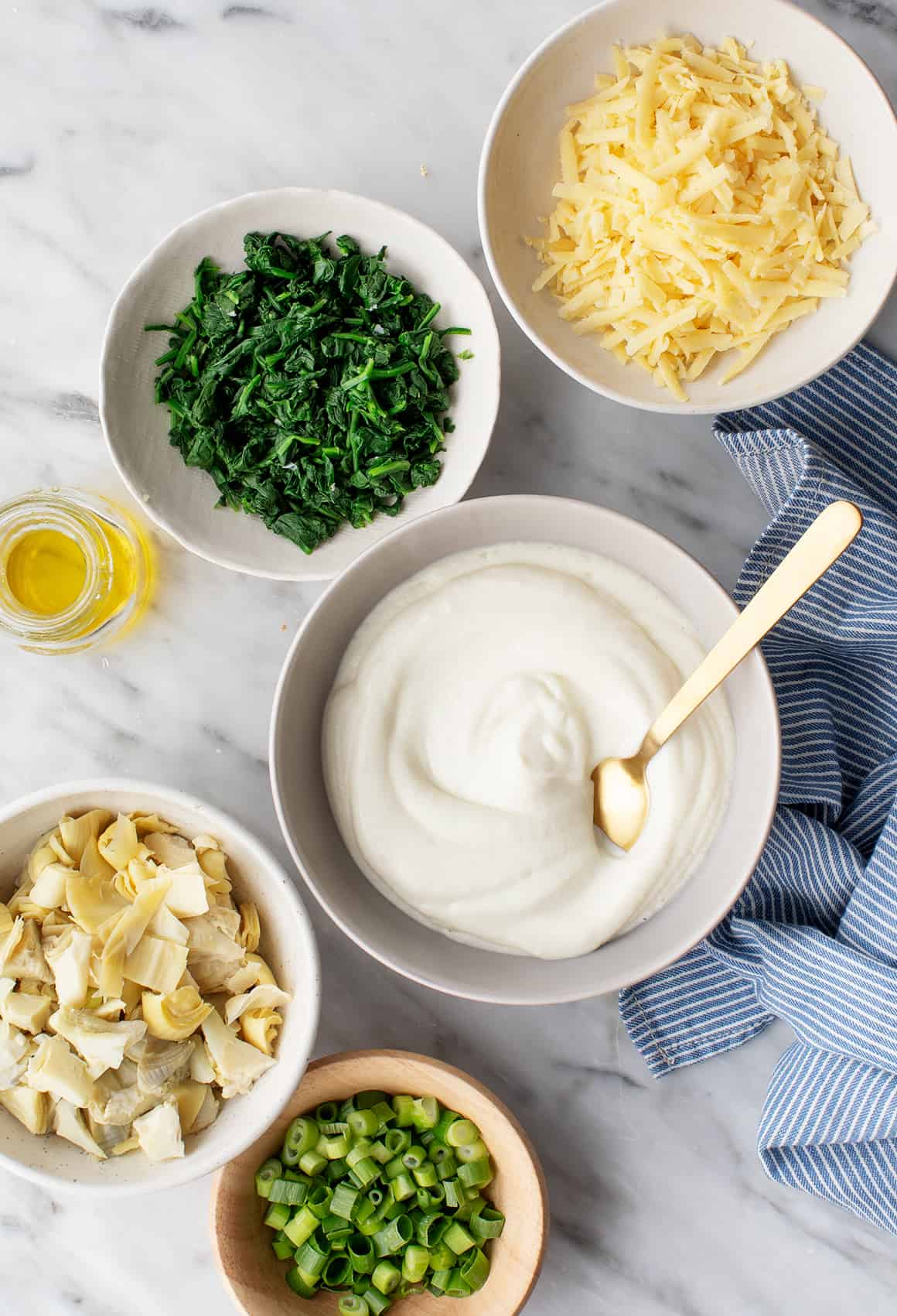 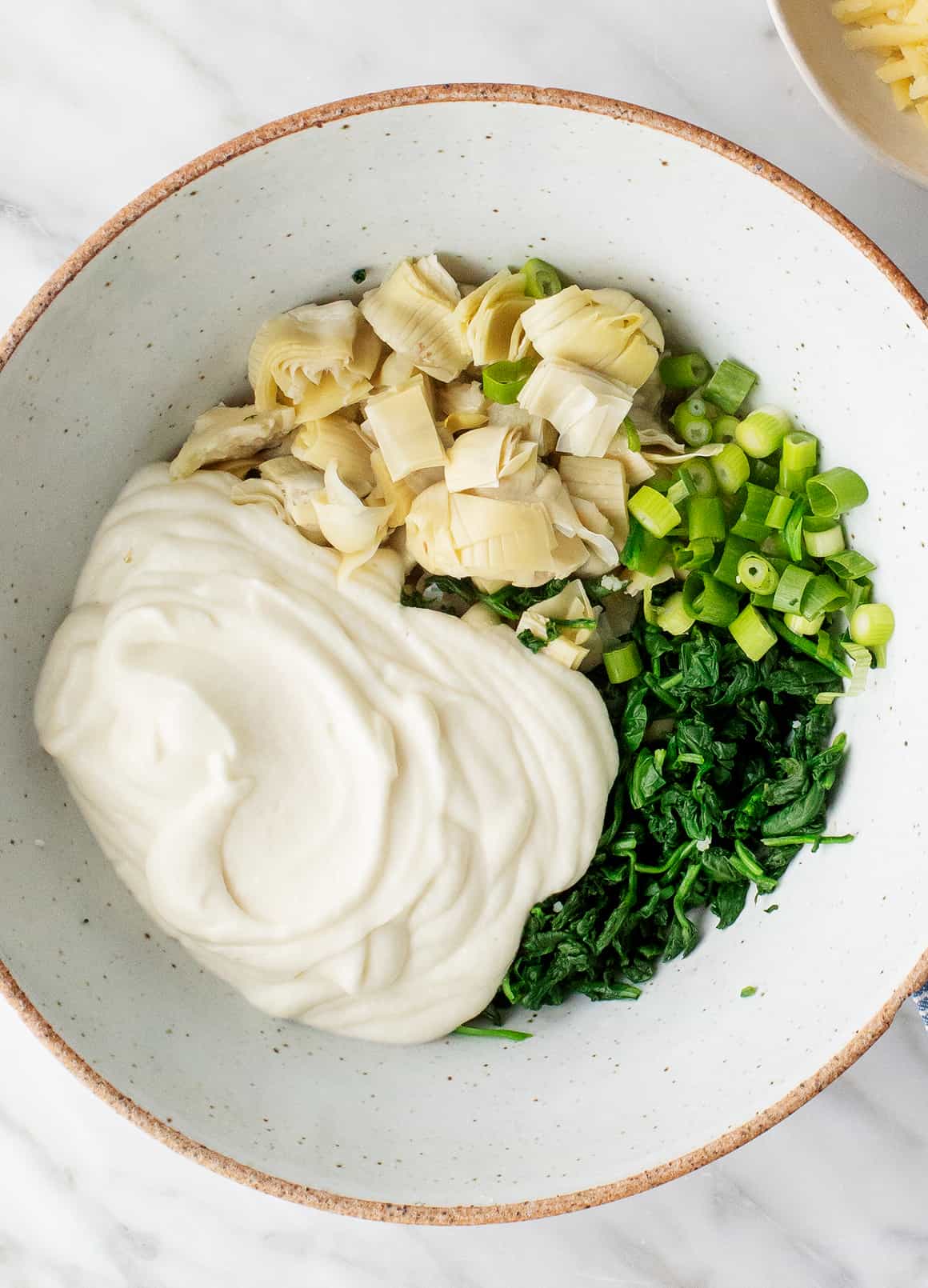 After you’ve blended together the creamy puree, mix up the dip! Add the puree to a bowl with the scallions, chopped spinach, and artichokes, and stir everything together. 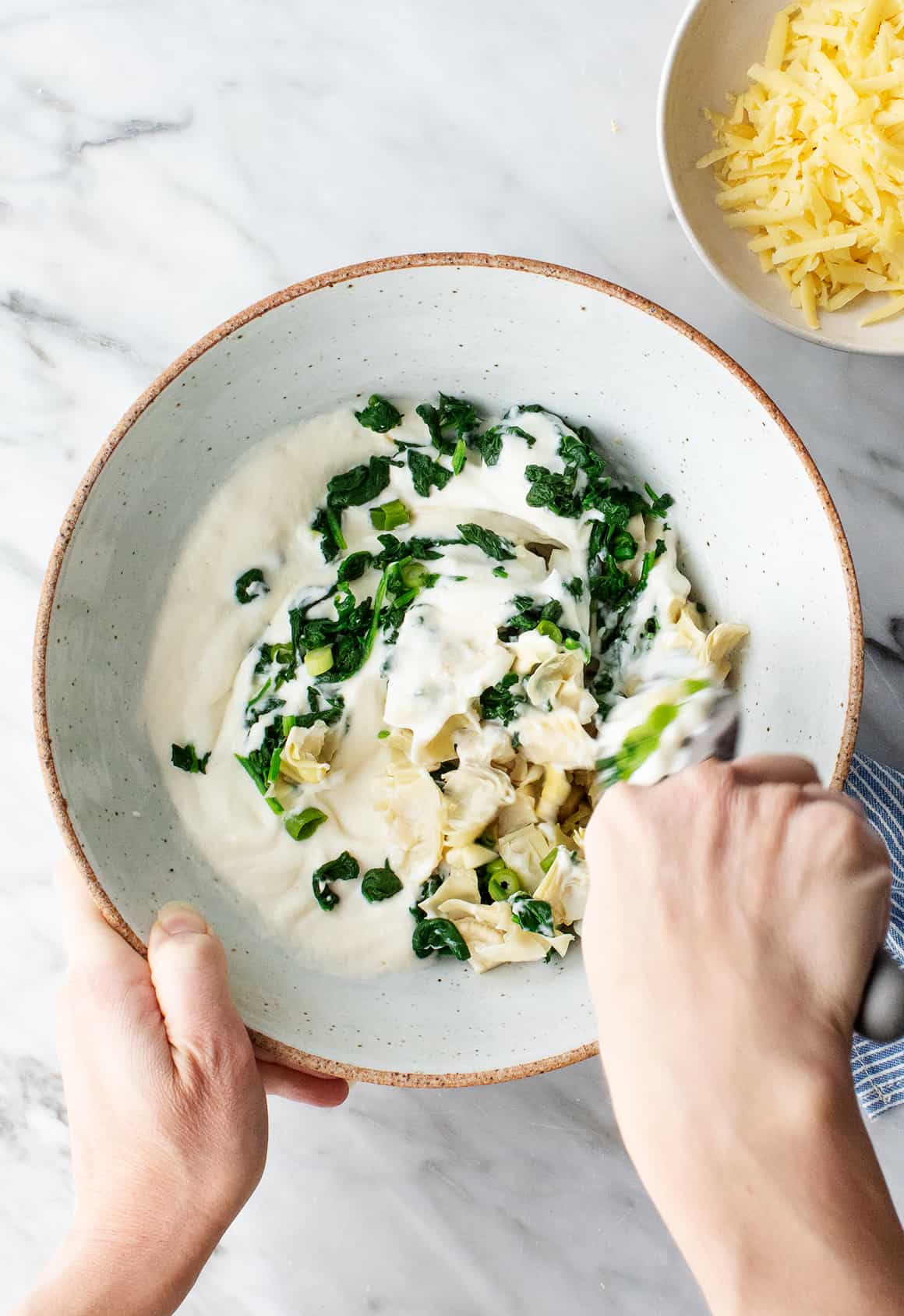 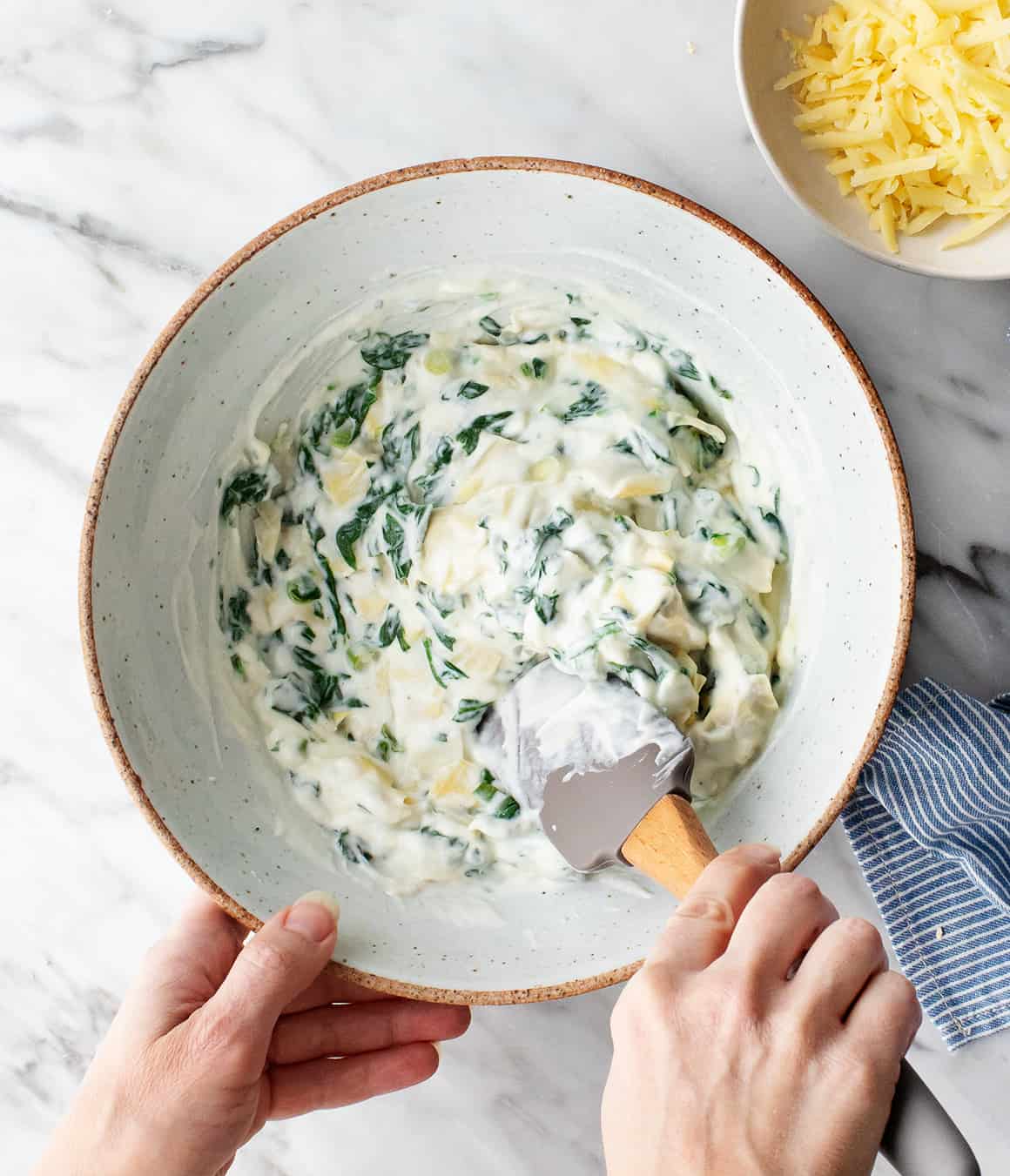 Finally, it’s time to bake! Spread the spinach and artichoke mixture in a lightly greased 8-inch cast iron skillet. Sprinkle it with grated cheese and chopped scallions, and bake until the cheese is golden brown, hot, and bubbly. Garnish it with chopped parsley, and serve with toasted baguette. Enjoy! 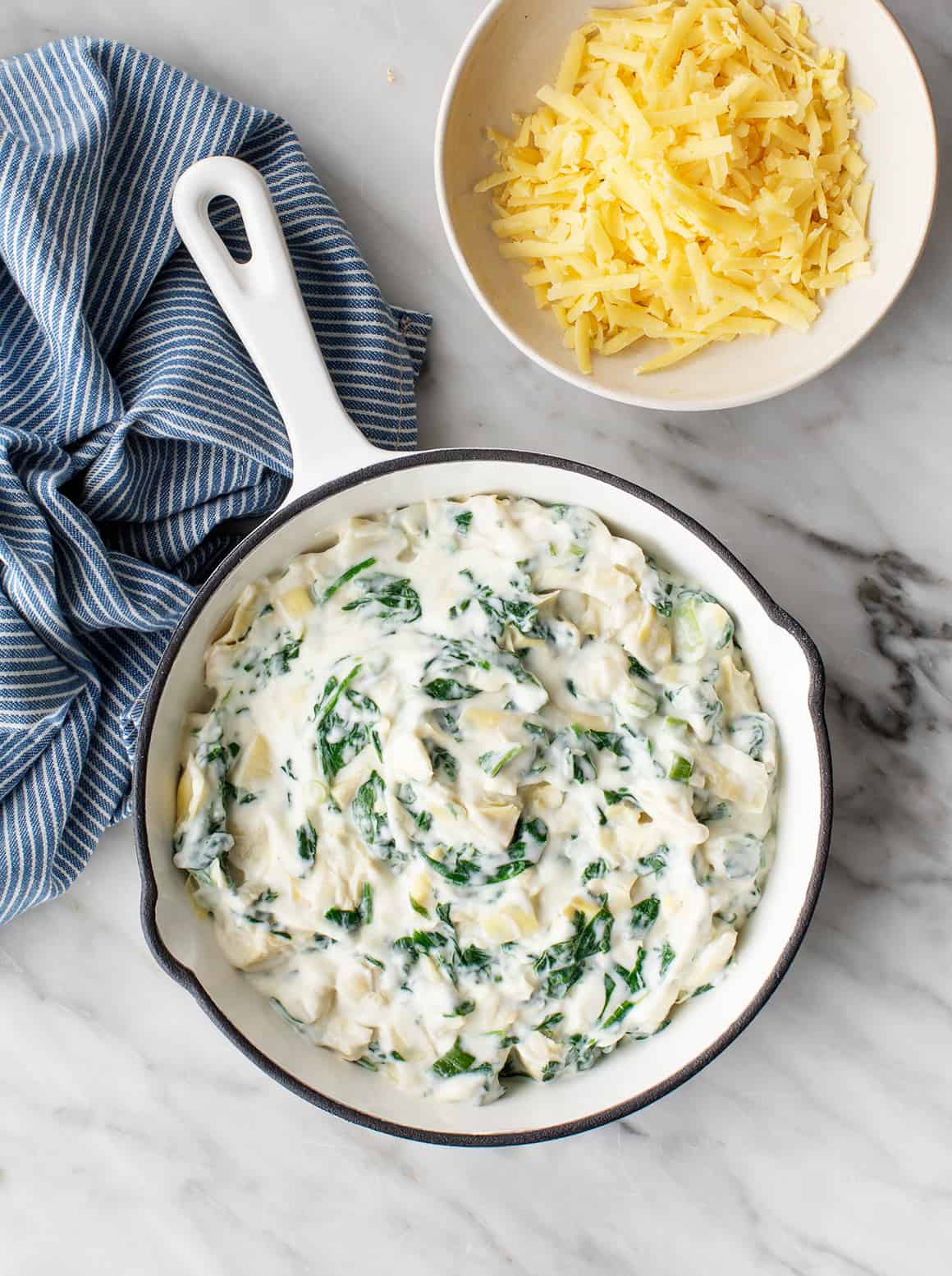 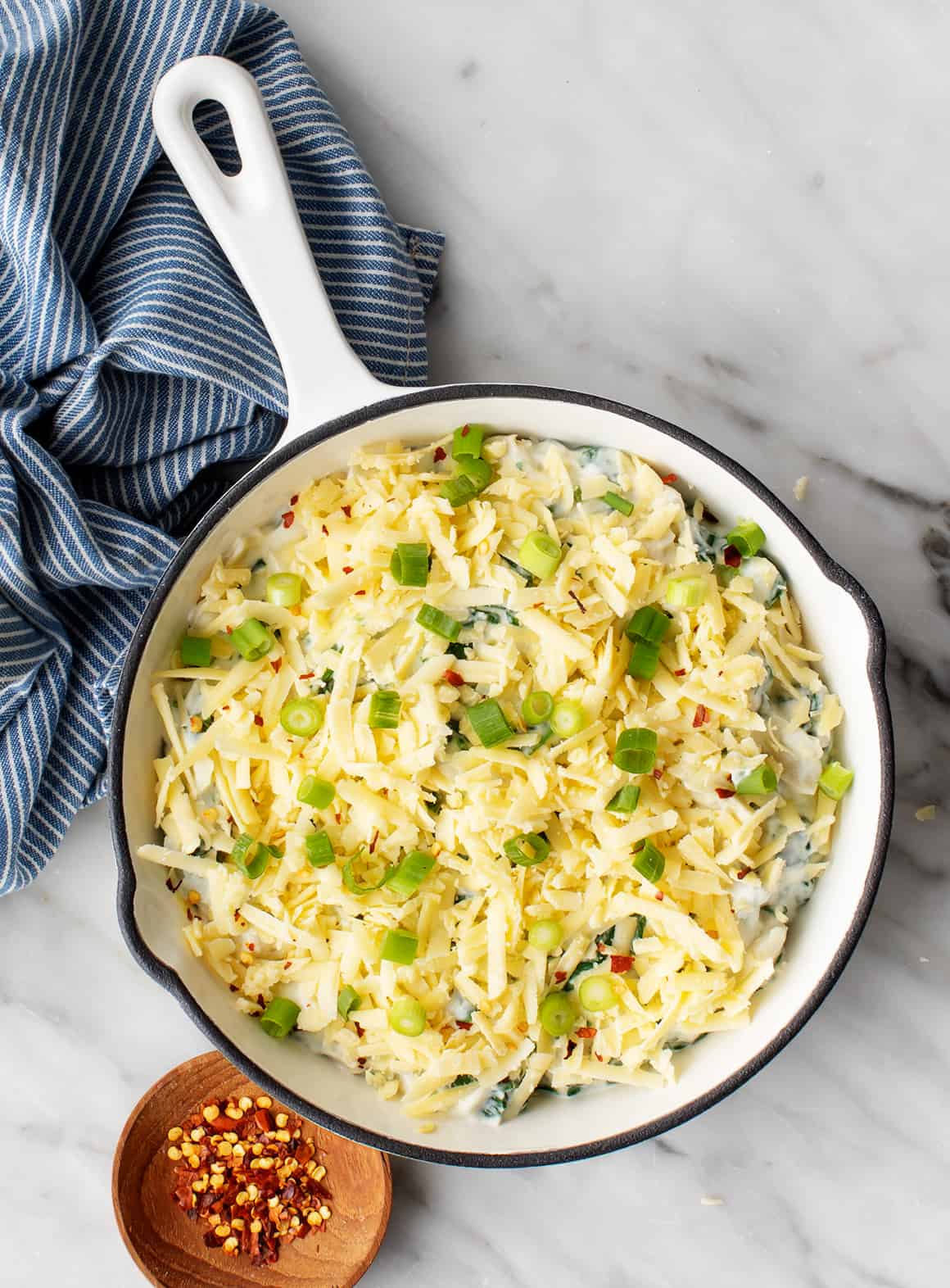 If you love this spinach artichoke dip, try one of these favorite appetizer recipes next: 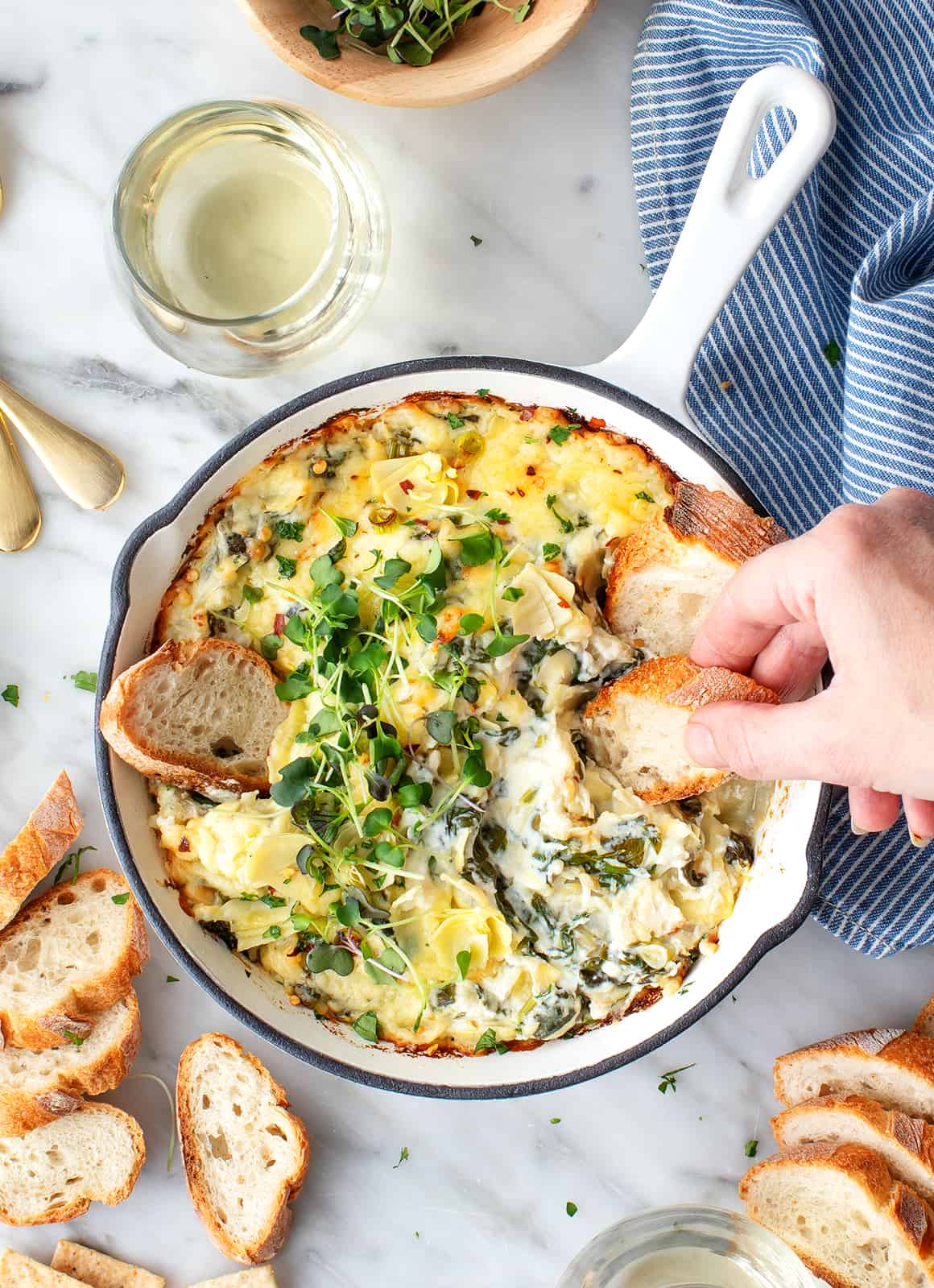 rate this recipe:
5 from 9 votes
Prep Time: 15 mins
Cook Time: 25 mins
Total Time: 40 mins
Serves 4
Pin Recipe Print Recipe
This spinach artichoke dip is a delicious party appetizer! Serve it warm, but be careful with the skillet. It will be hot when it comes out of the oven.

For this recipe, I use Stonyfield Organic Grassfed Greek Yogurt, which is super creamy. I use Sir Kensington's Dijon mustard which has a mellow mustard flavor that's not overpowering. 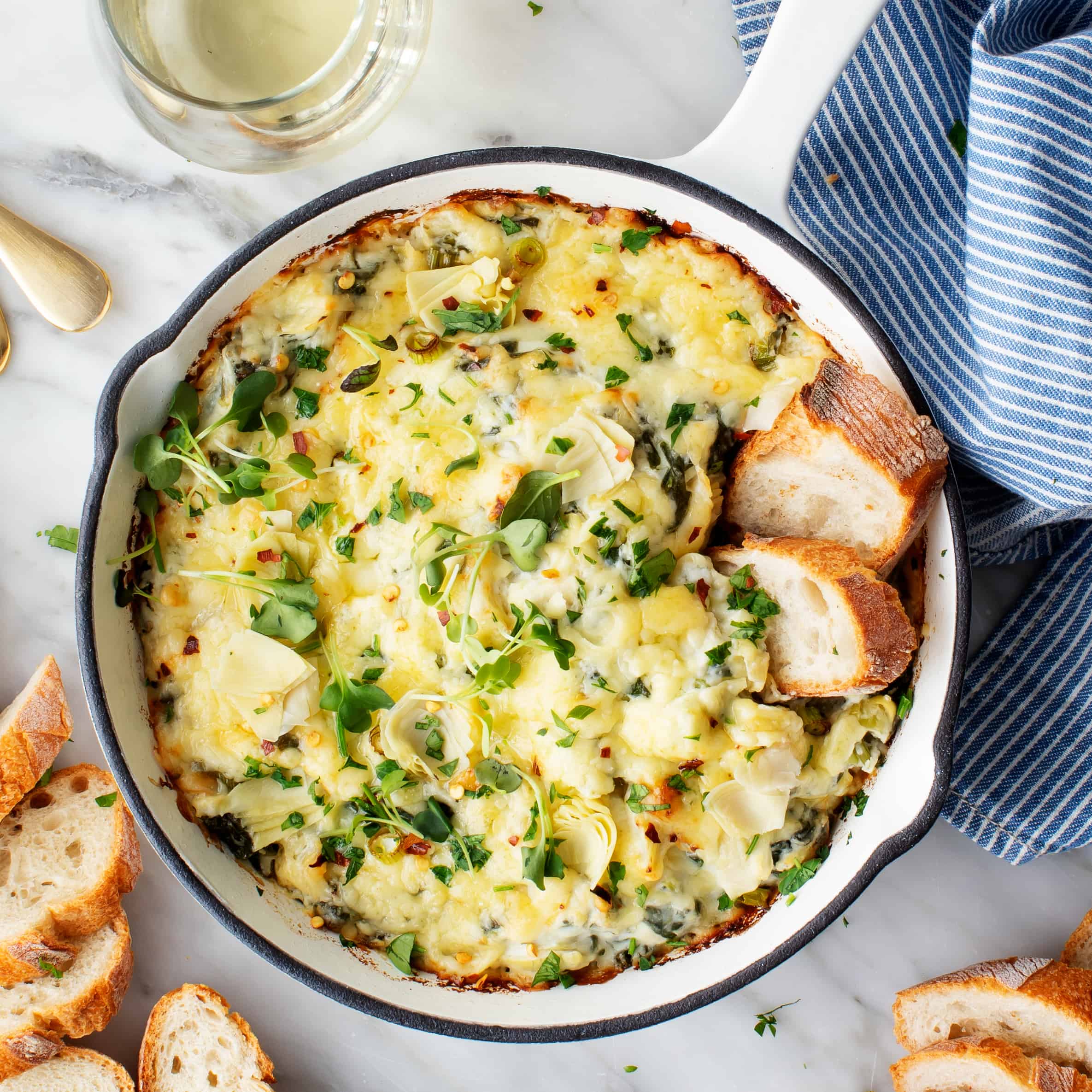 Did you make the recipe? I want to see!
Tag @loveandlemons on Instagram.
✕
Free Bonus:
5-Part Guide to Delicious Vegetarian Eating!

We love to eat, travel, cook, and eat some more! We create & photograph vegetarian recipes from our home in Chicago, while our shiba pups eat the kale stems that fall on the kitchen floor.